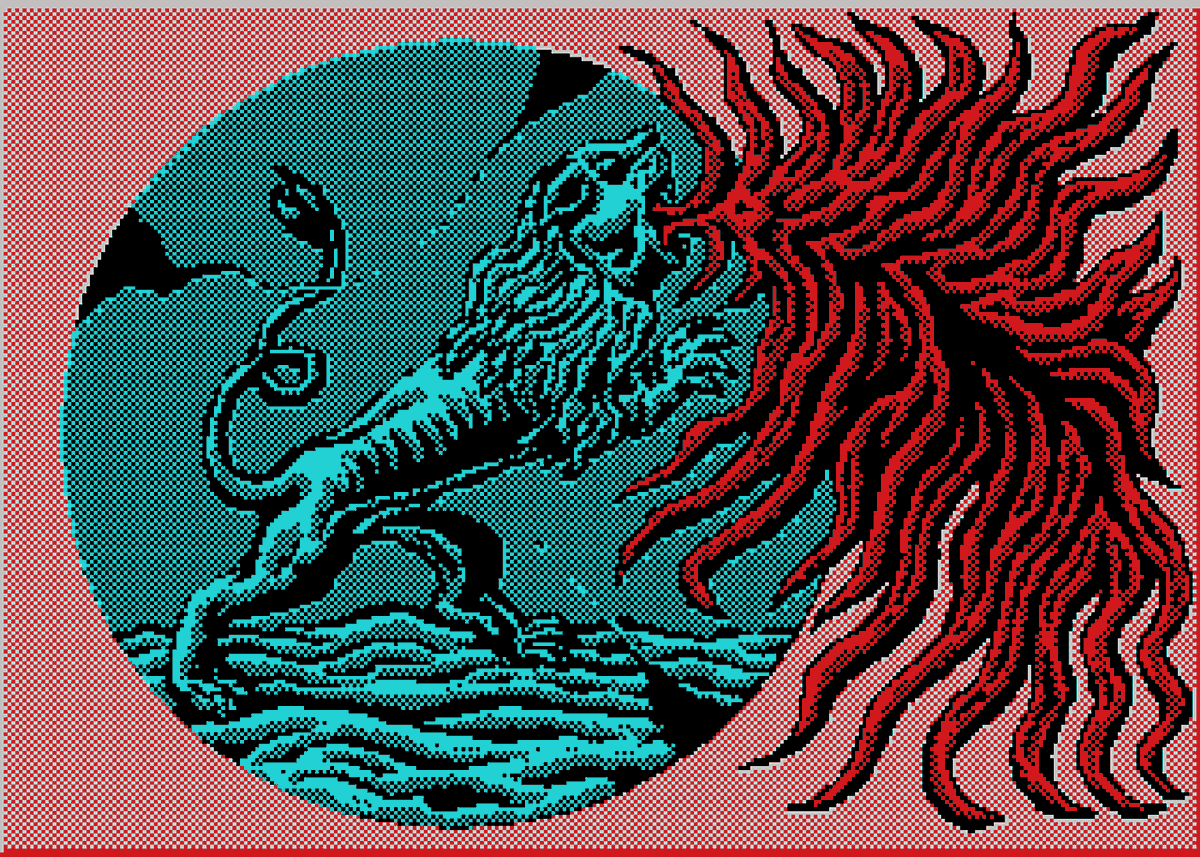 When you find yourself in a well-known underground club Kombinat, know that you have failed to notice both the gallery and the exhibition, that you have passed by carrying heavy thoughts, unaware of the world around you. Oh well, never mind, you buy a beer at the bar and go outside, you go back through the tunnel and there, where you see the light at the end of the tunnel, where you hear the buzz of Zemun’s Main Street, that’s where the Tunnel gallery is, and in the gallery – Pyromania! An exhibition by Veljko Onjin. The Middle Ages are coming back with style, passing through the triumphant arch, accompanied by drums and trumpets, in one word – a ceremony full of splendor and in honor of the stronger fire. Veljko Onjin takes us back to the good old Middle Ages, the dark ages. Only the true believers will be saved, the sinners will be punished, the stronger fire is coming, the passage to the circles of hell is being expedited, some sort of good policemen are helping to prevent traffic jams, just take it easy, people, there’s room for everyone, you don’t need to push, everyone’s turn will come, let’s go, single file, one by one.

Veljko’s contemporary interpretation of the Middle Ages brings the purity of the old and forgotten Spectrum computer, the good old bitmap graphics, forgotten fantasy, the real image of a martyr, the fire is spreading, everything is burning, multinational companies are burning, animals are burning, frying in their own grease, in their own sauce, the one who giveth is the one who taketh away, you called for him and now he comes to collect his toll, for your fat salary, a comfortable chair, two chairs, your social status, unfulfilled wishes, knowledge remains knowledge, the fire is becoming stronger, the flames fly nonchalantly pass security cameras, crashing through gates, melting metal and glass and wrought iron, the fire is turning everything in its path to ash and dust, a great fire akin to – as you’ll remember – a fire from the Middle Ages, it is spreading and getting stronger, nothing can be heard except for crying, everybody’s crying, not only the women and children and the elderly, men are crying, calling to their mothers, a time has come when you cannot trust anybody, your own uncle screws you over, your best man crosses you, your mother leaves you. Wherever you go, wherever you return to, you see the same, the death is spreading, your sense of smell can discern only the stench while your body is weakened by hunger.

A secret society of enlighteners, established in 1993 in Sodara[1], has developed a plan to put a stop to primitivism, barbarism, and superstition, and is finally enjoying its moment of glory, the flames are everywhere around us, bonfires are being prepared, spears are getting sharpened, the guillotine is as precise as a Swiss watch, the end days are here, the inquisition is taking responsibility for wiping out the non-believers and blasphemers from the face of the Earth, to fry all the sinful ones, the fires are getting stronger everywhere around us, and for a reason. The time has come to separate the wheat from the chaff, for everything to fall into place, the long-awaited judgment day is coming, so we can start all over again, from scratch, or as people would say, back to square one. Maybe this is our last chance, maybe this is our only chance, maybe we don’t stand a chance at all.

Apprentices are complaining, their masters are protesting, while the servants mostly keep quiet, everyone is plotting against one another, parliaments are being influenced, governments are falling down, laws are being changed, workers’ rights first improve and then worsen, manual labor is declining, yet, at the same time, it has never been stronger, the new manufacture, slaves, real slaves, free slaves, witches, teachers, good kings, gusle players, the Aromanians, the gypsies, all as one! All sharing the same thought: God, what is happening? What did I do to deserve this?

It was long ago that the distinction started to be made, to be instilled in our bones, taken for granted, to dominate us, to reduce the possibility, to prove the difference, because it’s just a piece of graphic art, a screen-printed image. Don’t give me that!

It won’t hurt us to remember the rebellion of peasants in Normandy at the beginning of the tenth century. When some of the peasants suggested they rob and kill their nobles, others swiftly protested and said: Let’s show them that we are good Christians, let’s send messengers to our masters, to inform them of our misery, and then maybe we’ll see some improvement. The delegates were received by the duke’s uncle, earl Raoul d’Ivry. He refused to hear them out and decided to arrest them and cut off the arms and legs of those who, according to his opinion, already rebelled, and, in such a state, he sent them back to their friends, who later refrained from making a sound, or a peep, or say anything at all, and with their heads hung low they returned to their plows and forgot about any thoughts of resistance.

The evil is coming back in style, the Noah’s Ark is burning as well, there are no corridors, everybody’s complaining, credit cards are not working, there’s talk of the Illuminati, the Masons, the East, the West, Croatians, secret forces, powerful levers, gold bullions, masters and servants, curses are thrown, evil eyes are looking straight at you, the forces of power, the domination of the United Nations, narration as inflation, a small wonder, slightly weird, I thought we were doing just fine, we were riding the wave, the world was our oyster, I thought we were going in the right direction, we were eating well, fucking well, minding our own business, both before and after business, not sticking our nose where it didn’t belong, eating good breakfast, sleeping regularly, not talking about what we were not supposed to, aware of the rules, in other words – a paradise. And then, behind a pitch-black corner, two bums, pyromaniacs, soaked in sin, robbed a pharmacy (for their own needs), all their life they caused evil, both to themselves and to others, true – they were good with dogs, and now, all of a sudden, a stronger fire, the spirit of the ancestors, their every word golden, a tear after tear, the fire is even stronger, swallowing everything in its path, the whole world is returning to the Middle Ages, let’s take it from the top, slowly delve in our problems, change the time, add some details, these are not lies, grease them up a bit, add some oil to the fire, put some salt on the wound, let McDonalds burn and his father and his son and his unborn children in their mother’s womb, let everything burn, the hunter and the doe, no, thank you, I don’t need any dough, the assassin for hire and his glorious ire. The fire is swallowing everything, it is spreading across the rivers, the bridges are burning and everything is getting worse, getting worse for all of us. The prisons are full, everybody’s waiting to hear their sentences being read, hangmen are working overtime, the wicked are being purged, while the virtuous are saved, this is how they teach us not to stick out. To clutch at our hats, to bite at our lips, to wear our opanaks[2], to lie to each other, to conspire against one another, to save our souls, get lost in the crowd, start smelling bad, feel the tears and sweat, see the darkness at the end of the tunnel, but how, we are too far gone now, the devil came and took the joke away[3], we came full circle, the gods became angry, people went wild, monkeys turned to silence. In the end, everything comes to its rightful place, even you, my untamed little shrew. For too long I was good to you. You have somebody to take care of you, it’s not your duty to think. You just do your job and you’ll be granted access to a prestige society, a soft bed, and dry underwear. In order to live happily, one needs only small things, a steady paycheck, a monthly installment, the comfort of life, Parisian lofts, American crises, terrifying silences, pass me some of that best wine left over from yesterday, we only live once, we only die once. Those who know, know; those who don’t know, await punishment, in best case, it’ll be whipping, if you’re lucky, but you won’t get away that easily, ears are being cut off, bones are being cracked, people are getting quartered by horses, confess and you’ll be better off in that other world, cleanse your soul while you still have the time, your substitute is eagerly waiting to replace you, there’s no reason to feel fear, you are simply out of here.

And the rightenous ones, the servants of god, the lawful ones, the hermits, and all of their kind, all those who thought they would slip through the cracks, all of them were wrong, they miscalculated. Simply put, there’s no salvation, everybody will get fucked.

[1] t/n: a suburb of Pančevo, Serbia, the birthplace of Veljko Onjin.

[2] t/n: Traditional peasant leather shoes worn in Southeastern Europe. It is a national symbol of Serbia.