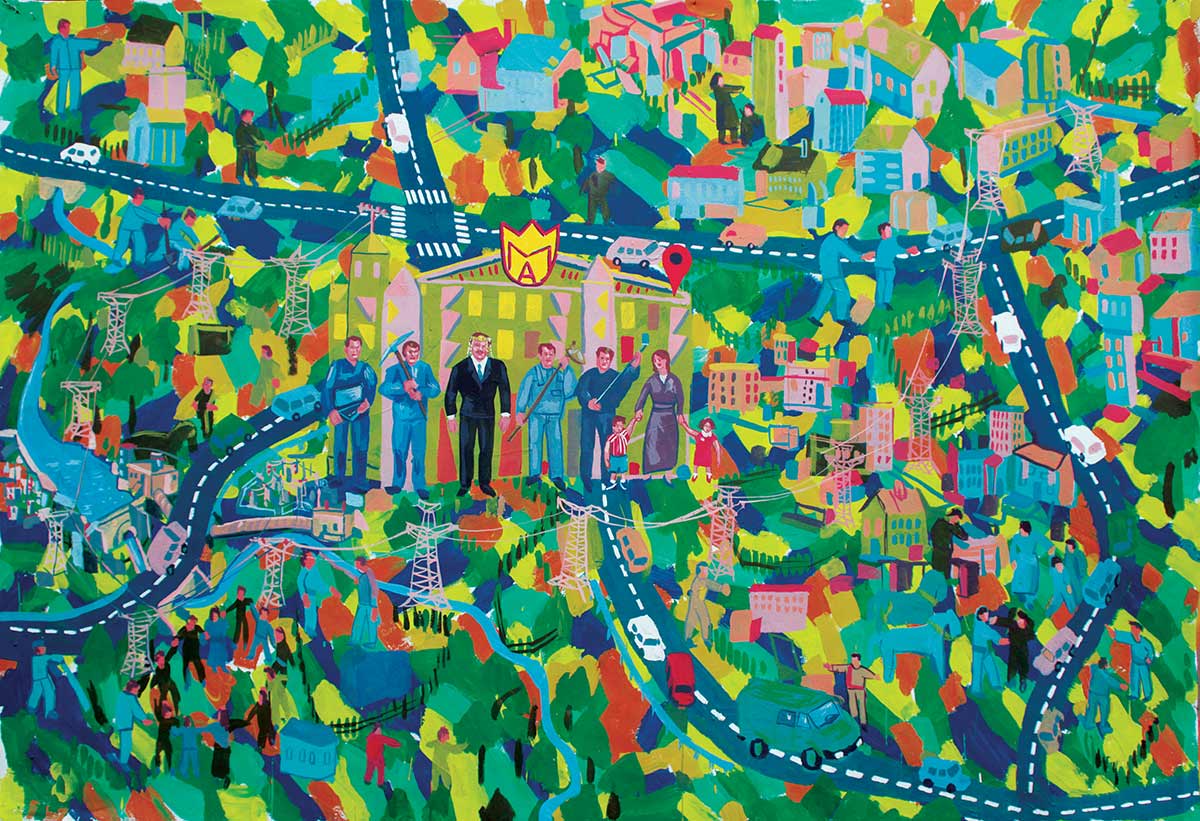 All facts need to be reevaluated. This is what the 18th-century philosophy of Enlightenment has taught us. They spoke of ancient philosophers and tried to maintain a continuous historical thread with those people. In order for one to discover something and then successfully explain it and prove its existence, one needs to sit down and study. The whole of science basically comes down to copying or quoting someone else’s work. On a seemingly regular piece of paper, with records of names of people who lived a long time ago, one could find inspiration, food for thought. I would read these things and I would love the sound of the word. The reader of this text might perceive the author as original solely based on the rhythm of the words and how they’re placed on the paper in space and time. Suddenly, the word would become a motive to create new words. Maybe just because they would feel good as they rolled down the palate or the way they would fill the air of some university amphitheater. They simply stick to the ear, live their life and keep bearing new children.

We all know the word is a precise thing. It is a purpose onto itself and it has created the world. If there were no words, we wouldn’t exist. The word is written in blood and sweat. The word begins and ends all.

I made you and I am going to destroy you is what every parent tells its unreasonable child, and what does a child know. The child is endlessly free, and yet has to listen if it wants to eat something. It’s a new day and everyone should go about their business. Men and women to the factory, children to practice and discipline. Everybody’s bathed, driving or walking every day with sandwiches in their hands. While the bus driver at the end of his shift answers the question of his colleagues, don’t ask, I’ve got a rash. Old ladies talk about how young women are dressing these days, while middle-aged men say we live in a second-rate country. A young worker does not know that the famous party organizer entering his woodworking shop had been organizing parties while he was still wearing diapers. Such is the order of things, the high school student in Graz realizes with horror as the headmaster strikes him on the head with a ruler. Do adults beat their children first so they could make cookies for them later? Why can’t a man always be in love, instead of wasting all of his time on spinning the pedals of life?

An old woman in an occupied film theater is reminiscing how lovely it was when the partisans started showing films, she could definitely become an inspiration for young women who wish for something new other than running to catch a bus or argue with their aunts, while the old woman with a smile on her face talks about how, when she was younger, people told her she had a right to vote and choose what to do with her life. Young people are saying that this is exactly what we need today, female mysticism and male precision are not enough, we need more mutual respect and honesty, yet we eat food that shouldn’t be eaten, only because it was promised to us and because we are entitled to it. Is it right for our parents to feed us and our grandparents to teach us how to become people? It is right, but only random, and oftentimes people with narrow minds, who can’t see themselves or others, convince us to imitate them. A woman with a small boy is shouting at the driver of the city bus because he had braked suddenly at the intersection and almost hurt her child, the driver is arguing with her and soon he drives the bus away. Was the mother overly protective of her child? She cried while she argued with the driver. Or was this just a whim of an arrogant parent? Was this even a real problem? Only the bus driver knew. Everything is measured by law and yet belongs to the domain of feelings and is thus subjective. The law has no more loopholes, they’ve all been filled, yet all of it is conducted by human will. This modern system produces demystification of knowledge and is looking at the bottom of the answers-holding barrel. I grab a hold of a simple seal and I think I can solve all my problems, and by securing what is rightfully mine I provide others with a chance to do the same. Responsible people have always had a personal motive, and in anarcho-monarchy personal motives are motives of the entire group, everyone works for themselves cooperatively. All work is done willingly and without coercion but it is impossible for someone not to work. Work itself does not have value and as such it does not exist, the price of work is determined arbitrarily. Those who work more and more diligently than others do not receive higher pay and benefits. Materials and other goods have no fixed market value. What is being sold cannot be turned into a profit or be valued more than its true value, and this value is nonmaterial. There is no accumulation of capital. Capital does not exist. Elections are being held every four years but their results are not implemented. The deciding vote belongs to the electoral committee headed by the king, and king’s confidentiality is highly respected. So is the confidentiality of others but others are required to give everything for their community and this community is called the state. But this word is just a name; it has no theoretical elements of the state. The king and the state are not obliged to respond or serve the people or an individual in any way, but on the other hand the individual has to be obedient. The king is the most illustrious and most powerful man in the community and he is endlessly revered. Between the king and the people there is nothing, no classes, just the people and their king. The king’s wealth holds symbolic rather than material value. The duty of the king and all citizens is to make sure that the glory of the state is always well presented and to build churches. There are no taxes because everyone knows how much they’ve been allotted and everyone gives what they have. Technology is highly regarded, electricity is being produced and those who have electricity have power. This isn’t a layman’s society, it is governed by reason and it has its purpose and this purpose is decided most crucially by king and the church. Everyone is free to believe whatever they wish and to govern their lives according to their wishes. The king’s disputes with political opponents only have regulatory weight, because he doesn’t participate in disputes just because he’s right but because he wishes to achieve his common good goals.

This common good is being realized on a micro level and the determining factor in this is the number and size of king’s goods. In the eyes of the people the king is an ordinary man when in fact he is a tsar[1]. Jokes are constantly being cracked, the king is in a hurry to reach a conference in Copenhagen and his colleagues ask him why he’s flying like an arrow. This is a joke because after arriving at the airport the king just sat on a bicycle. This act is a silly one in anarcho-monarchy, because of the relative traffic priority rights; a bigger vehicle is just as important as the small one. Often, the king will participate in philosophical debates and will try to present his life and experiences as an example to others so anyone can find something they can relate to. If the king has made a promise it doesn’t mean he will honor this promise. The king is given unreserved trust and who wouldn’t trust him when he trusts himself so much. I’ve found a certain connection with history in this king persona – I saw him sitting at a cafe in Alexandria in 410 AD, when the philosopher Hypatia was slandering Patriarch Cyril in front of her mates. Then the king explained the temptations these two were facing.

Of course, it’s dangerous to stand firmly behind one’s opinions, especially when I’m around.

The king participates in all work. He visits factories and farms, searches for the latest software apps. When they asked a renowned Belgrade-based doctor and politician who worked in the king’s co-op what were the plans for next year he responded that they would work on increasing wealth and efficiency and a slow transition toward work evasion, landfills would be selectively maintained, river trash would not be touched, only the swimming pools would be cleaned, each factory would be introduced with an added 30-minute break for games and dessert, and new songs for the king would be composed daily.

And what our enemies think is not important to us, because they are almost like friends, because both our knowledge and our ignorance give us power. The power to be elected and be chosen, to hand out arguments, set goals and demands, to discover in the flaws of others our own great abilities, to point the finger at others and to let others point their finger at us. The king is eternal and so are all his buddies. The king is a tsar. You can cry and you can beg but the king is great. The king is golden we sing about him often.

[1] In Serbian, literally meaning an emperor, but used colloquially denotes a person of extraordinary greatness.