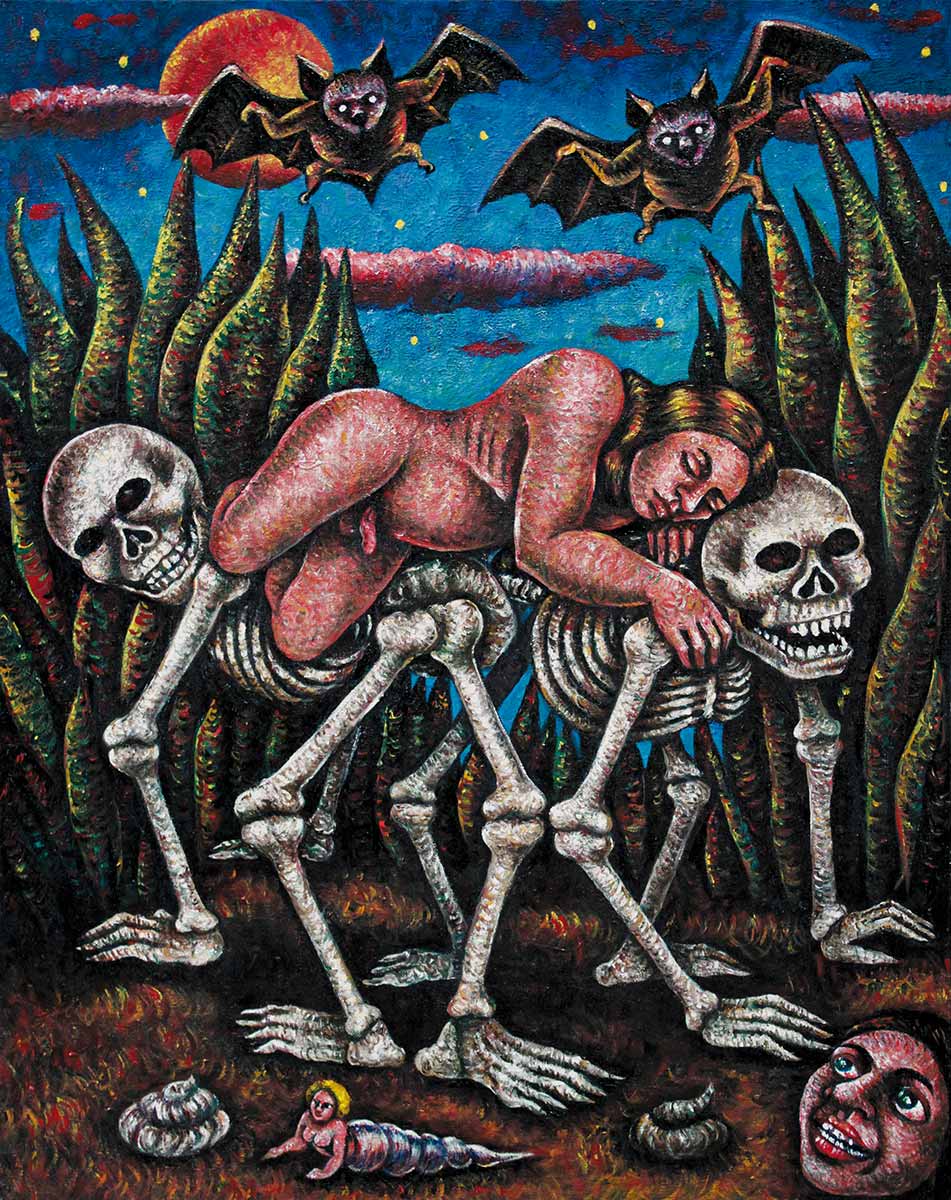 Anne Van Der Linden is a governess, an owner of a castle or castles (should be checked) and the surrounding moats, a landowner of woods that border the empire and most of the provincial estates. The total land area of her possessions is estimated at some 67 square kilometers in a single piece of land, and, it’s rumored, at least a third of that amount spread throughout the East. The grand estate is organized, more or less, as a series of gardens, which are sufficiently, although practically invisibly, surrounded and guarded, and which only she can access. The gardens are drawn, painted and printed. From the way she presents them, it is clear that this garden, like all other gardens, is an enclosed space, and that much effort is needed to fill it. Her gardens are saturated, spatially and narratively, with line and color. There’s no excess of air, no simple breaths, no easy moments, it is what it is, there’s nothing you can do about it if she wants it that way, as people would say – it’s all hers. And everything that inhabits the gardens is hers as well, it belongs to her, in a socialist-feudal kind of way, she is the main witness and the main protector, the warrantor of truth and opportunity. We are better off not to judge, or we’ll end up in a Japanese riddle.

Let’s take, for instance, a certain Nightmare in which a flying demon is skull-fucking a zombie woman. Is this a human’s or a vampire’s nightmare? Who sneaked into whose existence? Humans stuck in pandemoniums and bestiaries, and beasts lingering in a human world? I don’t know, you tell me. Are people alive or have they died in the Middle Ages, and these are their deceivingly visible Ehotons[1]? For example, a mahogany Ehoton is either visible or invisible. It depends on how dark the hair color base is in the first place. So, for whom is this a nightmare? For the woman? Laying there, immobile, abused by an impure force? For the poor demon? See where he ended up, a cheap thrill for the living dead, flying around like an oral-pleasure Tinker bell submitting to fetid urges of those putrid creatures. But, that’s what a layman would think. Anne Van Der Linden would not. All her dragon vampires, vampire babies and vampire flies, and mutilated bodies, sliced up or eaten, sucked in and swallowed, an orgiastic heraldry of the animal/human/demon world, slightly more a massacre than an orgy, would never pass the official censorship of various prefectures, sinecures of the Synod and church institutes. This is why Van Der Linden is sticking with her garden, because at least it’s safe and it’s hers. All praise to the Synod and the Curia wherever their power may reach, but in the gardens we’ll do things differently.

Basically, it’s always about an event, some deviant narrative. Scenes can be easily narrated, but their stories are frozen in time, so the narrative becomes impossible, like the immutable state of Johanna’s imperfective, an uncertain outcome, active, passive, eternally unchanged. Events have a forgotten beginning and an unpredictable ending. These are not only events, but choreographies that are frozen in an everlasting meantime. They say that dance and song are so impure and ugly when put into words and rhythm that they invoke negative emotions even in very decent people. These are the images that disgusted the Jesuits back in the old days. The choreographies are conditioned by the corporeality of meat and bones (dermally and subdermally conjoined bodies twisted inside out and outside in, crammed and convoluted), social regulations, and the density of space. There is no improvisation, no cracks to slip through, no possibility of an escape. It is what it is. We are here. We are taking a ride on somebody’s back, and it will be like this for a while, what can we do, through underground hallways and old buried passages, underground waterways, caverns and secret chambers, mysterious corners of the universe, forbidden passageways, bolted doors, atriums, stained-glass windows, rare landscapes, forgotten observation points, but crammed, between a ficus and a doorpost, in a small Parisian square, in a dovecot, in a small maid’s room, in a nanny’s chest of drawers, on a carousel, in a basement, in solitary confinement, in a pit, in a colony, in a province.

And she repeats it in time before and after the wholesome healthy unique bodies and their individual selves anointed with intellect and moderation, the time before these poor and barren recent centuries, and in future anti-anthropocentric time, the time of the distorted and the impure, the mycoses and meioses, and other infrahuman phenomena, supra and ultra human, half cats, half monkeys, eaten away by mold and lichen on their marble and bronze, on their façades, their salons and antechambers.

Anne Van Der Linden brings back the distant invalid time, the heroic time, the unyielding new time. The time that is coming and that will be. And, in the end, she’s sending greetings to feminism from a ship sailing away on the open sea, she is waving toward the coast, where non-objectified, self-conscious, protected, unexposed virgins live. This ship is sailing toward long straits, where threats are real, rocks are jagged and dangerous, currents untamed, so she can greet her comrades, her brothers and sisters, the cunning mermaids, and stranded naïve sailors. Where the scent of rum and decay spreads quietly far away from the peaceful coast.  We have sailed away, we are gone, the horizon is our only ruler now, we are slowly fading over its curved border with the sky, we are sending the warmest and kindest of greetings, ciao amore, ciao feminism.