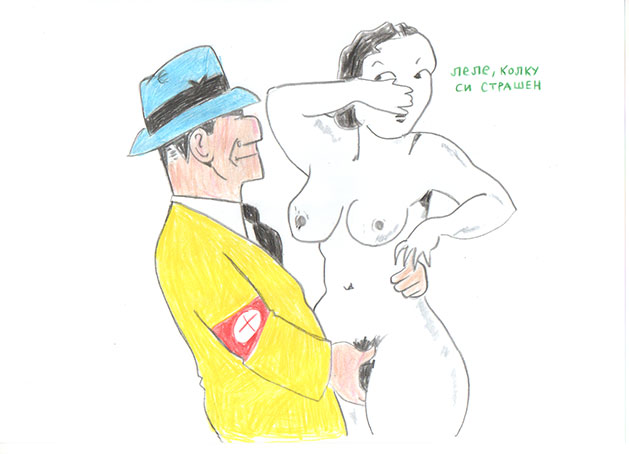 01 Mar kirčo arsovski Are You Schizoid?

are you schizoid is an album by kirčo arsovski, recently published by templum, which has still not shown up in belgrade bookstores. I hope I am mistaken and that the following news will correct me. from a worm’s-eye view, the world is beautiful. total emptiness, a feeling of uneasy loneliness, without ascenery in pictures, the books travel by boat…

it looks like nothing, and it is that which looks like everything, in other words it doesn’t look like everything, but it looks like something that looks like all of it and not just a little, but a lot, it’s that universal vocabulary, the original quality, a step forward in determining a certain medium as such, in these blending times, the enormous consequence of these works, which on their own, individually or together, coupled or ganged up, leave an impression of unconscious yet artificial nostalgia, of plastic decayed by time, the harshest critic of quality. kirčo’s works do not defy, on the contrary, neither school of thought, nor direction, nor school, they’re concerned with poetic moments in an aesthetic of exaggerated, stripped-down-to-its-totem, classical narration, but in a completely different direction, a vibrant cut-up practice in real time mixes the universes of special gods, a pre-emptive attack on dysney, the touching fate of superman, and two-legged animals that jump out of a theoretical framework, in the covers of an illustrated bible with no words, the new testament, that timeless source of inspiration for cynics, through the portal, networks and currents, burned pieces of paper, the last pages of some pulp fiction, roto print. the yellow paper and moisture that turn to dust. a microcosmic obsession with minimal giving in order to preserve the familiar myth.

to say it is something in between, some new internal code, a dogma, the lack of excess, this noise of uncalculated expression, the non-existent earthly narration, a friendly conversation, no. those closest to us are the ones we torture the most… an implosion within 4 corners and 8 bends would definitely be irresponsible. blasphemous and wrong, but possible, just like any other logical explanation.

the edged lines of colored pencils, the thickness of shadow, I admire the future chroniclers of these works in advance, the great masters of the written word, the future contemporaries of a more popular culture, popular art, the cult, the teachers of postanatomy in an unjust fight between a man and a woman, a man and supermen of different races, genders and general directions.

in the ring of life, workers of the light, in their own reflection seen through eyes of their enemies, it is a war of meaning, the subject of keeping tabs, unjustly neglected, misunderstood, within reach; but illusive, a story at the tip of the tongue, almost forever forgotten perfect solutions, the closest points of connection, a chronicle of last days, if not objectively, then surely subjectively, if not altogether objectively.

the superiority of concept, the unexplainable framings, the absolute imbalance of every blotch and blemish; several styles emerge which transform and mutate, just enough of them in a vast sea of works, so it can be divided and it can’t be. kirčo arsovski makes things difficult for the analytical mind, by substituting all the warmth of a recognized space in time, which is absolutely elastic, with a more instinctive one, more impulsive and organic.

one feels not only a pleasant warmth, amazingly displayed even in cold colors, the primary colors, but also the heat, the fire, the ball of thunder, each stroke and layer, surface relation, delineation; using old-school skills, a gift for the moment, for crucial moments, the hints of homage, red herrings, style wars, endless roots of under-style, the feeling of fatality, masked in grotesque, degenerate art from early xxth century, burned books, a series of moments that define events, cut-ups of moments, experiences foretold, the history that was forgotten. what?

during the middle, and later, the end of the 60s, the dark skies above the former yugoslav republic of macedonia, this cosmic dot, this air spa, just for a moment, was pierced by a trail of light. the color of blood became the color of lipstick. orange was never again called neither yellow nor red. green turned out to have the most shades. on the other hand, blue, the color of piece, the color of sky, dark blue, light, the light of the blue, of dusk, and pointed rays of early dawn, fractured acuity in the sky above kali yuga, the former southern yugoslavia, the dishevelled head goes home… it’s coming back from somewhere, a secret exhibition, of kirčo arsovski, at some old new era festival, the light of the universe. at the same time, in the same place, several months earlier, he was born and baptized as brat od sekta (brother of the sect), tajniot agent od sekta (secret agent of the sect), brat moj od sekta (my brother of the sect), Kiro Filips Kid, još jedan brat od sekta (another brother of the sect), Кирчо Кирчо, Kirčo Arsovski, Arsovski/… a monomulticultivator of minimal spaces for manoeuvre, a shredder of his own space, a master of dried pencils, twelve pieces of a palette of the holy spectrum, the cut in the diapason of light cracks, the beam of silence…

when he was young he probably, like most of his peers, did things boys his age normally do. like all children, almost all children, some children, he felt the movements, the beauty, the colors, almost everything else his former peers, and present contemporaries, felt. the people who have seen the 60s… the man who has never been seen will again be absent and will not attend his own exhibition. I hope he knows what he’s doing, he might even show up eventually, he doesn’t create spectacles, he is probably not overly ostentatious, apparent or obvious. true, he doesn’t hide it, but judging by his body language, discerned from fragments of movement on rare and blurry photographs, incomplete traces of a diagnosis with symptoms of hypochondria and correspondence written between third person singular and first person nihil, I come to the conclusion he is not keen on travelling. so, you might not even recognize him at the vernissage. he will definitely not recognize you.

sure, my thoughts about him, well, not really him but these heroes of his, familiar people, situations, many colorful vignettes of a world inhabited by his characters, heroes, enemies of his enemies, who are all buzzing around an irregular orbit around his private cosmos, and circling a concentric pathway from the third dimension, copied samples of previous present and future, possible and impossible situations, just like recognizing samples, of rhesus rhesusoids, ancestors, the ones that came before. finally integrated universes of marvel, dysney, dc, image, cartoon network, of all our yellowed almanacs, comics, heralds, blue birds and eagles. it was one of those meetings between a man and a sense of touch, the eyes that recorded the age in which a meeting is easily forgotten, a meeting online, sounds like a tragedy, a meeting in the end and so on. comedy.

looking at these drawings, extended illustrations, squares and quadrates, quad-arts, combinations of seemingly random order, as if prepared for any combination, position, and dimension, in any case a rounded narrative, whether they’re minimal in contours, shadows, faces or lines, or complex situations, filled with tension, sometimes almost always some kind of ambivalent aggression, red, green and blue, blue brown. from black white red and then the other colors, traces of color in the water on brushes, tips of remaining colored markers, even those that dried out, broken feathers, bristled brushes; the combination of colors, if I remember correctly usually 2 or 3, excluding black and white. recognition, like recognizing a comic book you once read, collected works, poetry in black, on already mentioned yellowed, degraded, some would say stinking, and for us, who are trapped here, scented remnants of paper, far from long-lasting, difficult memory, recurring flashbacks of vague scenes, colors mutated from old age, better, more mature, embracing death, the end. damned digital age, not even death is sacred. the vengeful storm on undefined quotients, extensions, modalities, and values, a wave which will wipe out all non-analog data, the great demagnetization is upon us, and only the dying paper and melting plastic will survive. yellow, heavy, and full of dust, the velvet walls, the glaze over the walls, the creases, stripes and layers, a stage set for old things, dust, moisture, patina, all the years gone by, the great age… the entire gamut of all warm colors, sharp and dry colored pencils, dying crayons, and aged chalk.

this text was produced during several nocturnal, early-morning and dusk-filled days of, not exactly an interview, but definitely, a conversation, and with author’s approval, error correction and sin absolution.