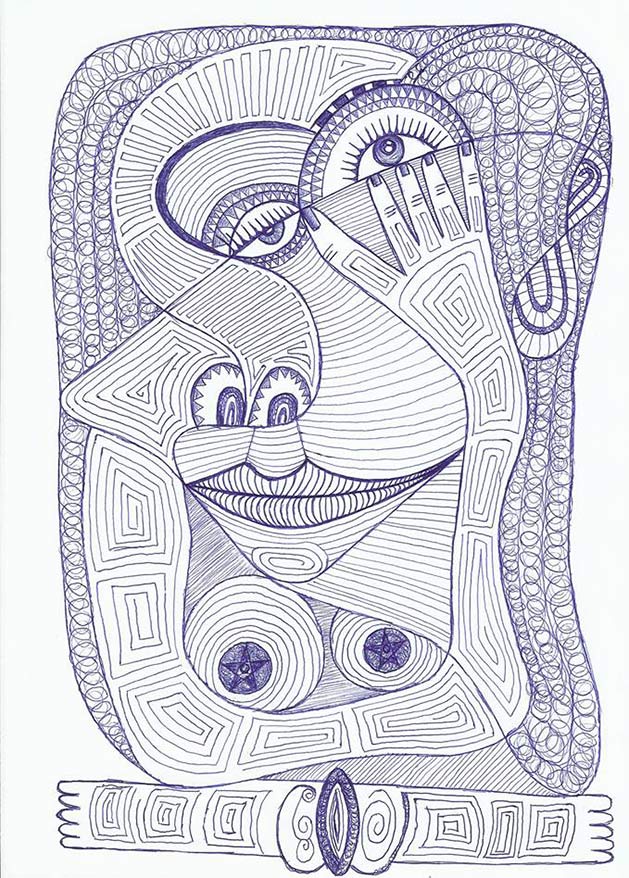 Posted at 08:11h in Uncategorized by denke 0 Comments
0 Likes
Share

I was born in Zrenjanin, Serbia in 1971. I live in a small town of Žitište where I attended elementary school. The first two grades of high school I completed in Zrenjanin, but after failing the third, I abandoned any further scholarly education. I served in the military for 54 days in the town of Ćuprija and, not being pleased with what I saw there, I decided to play mad and thus make them release me. My plan worked like a charm, I returned home where I began drinking. In 1996, I got a job in a local meat factory, where I worked as a house painter and decorator until 2008. My problem with alcohol had become severe, so in 2001 I went into rehab. For two years I have not tasted any alcohol, but then, due to a weakness in my character, I started drinking again, though not regularly, sometimes drinking excessively and sometimes not drinking at all for months, and so on until the tragic event of this year. I have been drawing from a very early age. As a kid, I drew actively, just as I am doing now, but in the intervening time, it only came in bursts and was intermittent.

From an online correspondence with Goran Stojčetović:

“Hello! A ballpoint pen is an excellent tool for drawing, which is something I observed while watching your works and because of unfortunate circumstances (my hands froze), I had to resort to your technique. Thank you for that. I had to temporarily (although I might hang on to it) work with a ballpoint pen, since I can’t work any other way, yet. But, I can tell you I am enjoying myself, for now I am still drawing preconceived forms, but time will come for a deeper dive…”

“I was on my way home from a friend’s house drunk as an ass. We drank Patoka[1]. I realized my best friend lived only 300 meters away, so I set out to his place because it was much closer than mine. I slipped on the icy road, fell on my face and was immediately knocked out. I struggled to get up and told myself “get up you drunken dog” (a memory I suppressed that came back after 3-4 months). I hit my head hard, I was unable to move and I became aware I was going to die. I woke up in a hospital, the nurse told me to cover myself because I had been frostbitten. She took out the thermometer, “good, 37 degrees Celsius, you came in with 32”. It was 22 degrees below zero that night. After 2-3 hours in the hospital the blisters (bullae) began to appear, the doctor came in and told me they would have to cut the fingers. A horrible feeling, but I kept saying to myself “they’re not gonna cut them, you’ll get better”. The bullae began to burst, oozing lymph like crazy, new ones emerging. The following day they took me to surgery. The lymph had been pouring out all through the weekend. I was admitted on Thursday morning. The whole weekend they monitored my condition, looked at my fingers and talked about things I didn’t understand. During the day I talked with other patients, but when night came, I was all alone. It’s not easy to accept the fact they’re going to cut off your fingers. But again I kept saying to myself “you’ll be ok”. On Monday, during the doctor’s visit, they told me to come to a certain room. I couldn’t guess what they wanted to do. I lay down on the bed, the nurse and the doctor took a scalpel and pincers and started peeling the skin off my fingers. They managed to pull off most of it. I remember the skin from my little finger coming off as if it was skin from a hotdog. It hurt a lot, and the doctor said “it’s good that it hurts”. They didn’t want to give me anesthesia, they had to check if I felt anything, especially pain, and the pain was severe. At that moment I realized they would probably not going to cut off my fingers. And then the pain really started to kick in, unbearable pain. They gave me 4-5 shots of painkillers every day, nights too. After 12 days, I arrived home, with regular check-ups and bandage replacement every other day. There was a possibility of an infection. What’s left of my skin, maybe some 30%, is drying out, and the scabs cover everything they previously peeled off. I couldn’t bend my fingers, the old skin and the scabs literally looked like some cast over my fingers. In time, new skin began to form, and the old one and the scabs began to fall off. After a check-up at the surgical ward, only the old fingernails remained and some dry skin on my fingertips. My fingers looked like claws, rigid, and my tendons were significantly shorter. I wanted to draw something even when I was in the hospital. At first I thought I would never be able to do it, and after some time I tried but it was too painful. Until April 30, when I saw I could do it. It still hurt but it also gave me pleasure. Now, I’m doing much much better, and I guess that’s it.” 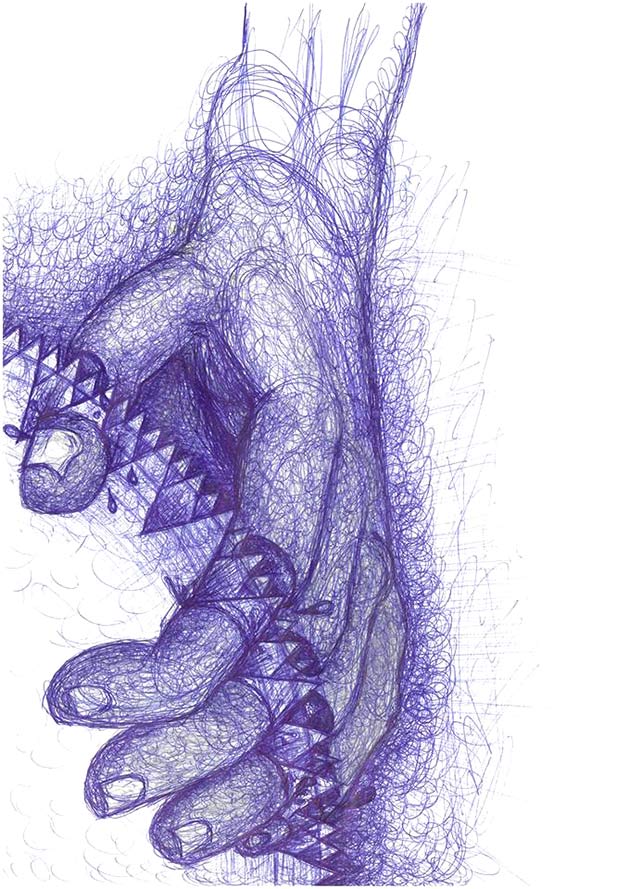 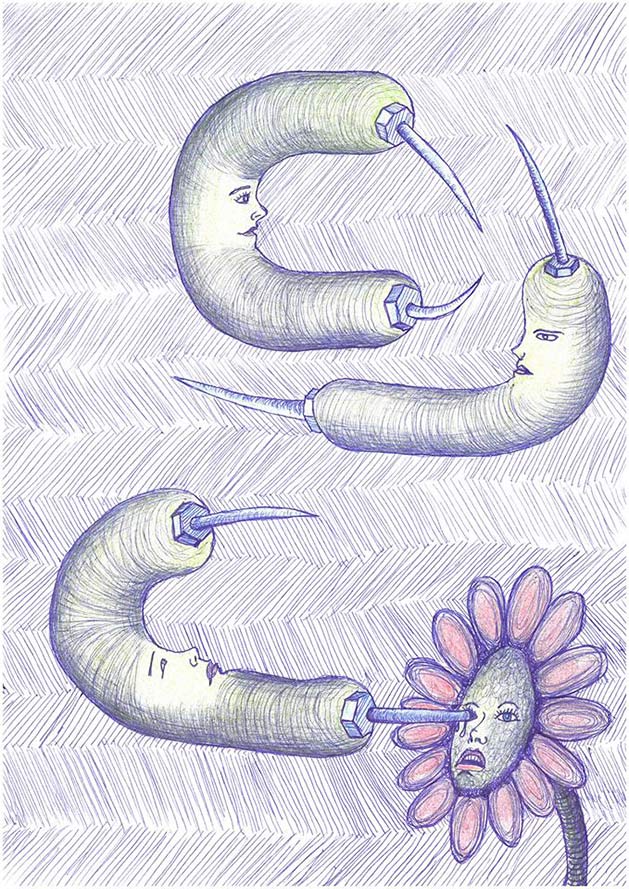